Bánffy Castle, Bonțida, is located 30 km from Cluj-Napoca. It is one of the most spectacular Transylvanian aristocratic residence, which functions at present as an educational and cultural centre, attracting fifty thousand visitors annually. 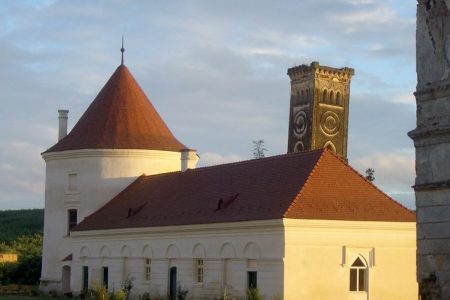 Considered in its heyday the Transylvanian Versailles, Bánffy Castle was built gradually from the 16th century onwards and gained its final appearance around the mid-19th century. The Bánffy family received the Bonțida estate as a royal donation in the 14th century. The most significant periods of its building history were the Renaissance and Baroque ones, but the aristocratic residence transformed into a castle ensemble also preserves Rococo, Classicist and Neo-Gothic features. Until the early 19th century, the Renaissance castle fortified with walls and towers could be accessed through the seven-storey-high gatehouse. Around the middle of the previous century, a Baroque cour d’honneur was added to the residence, its buildings housing the riding school and the stables. The gatehouse’s stones were reused by the family as building material for the mill located nearby, which was used by the local community until the 1960s. As a result of the construction works in the 18th century, a French park was created, which was later redesigned into a Romantic park. Due to this, the façade facing the park was rebuilt in Neo-Gothic style.

Prior to 1944, the most beautiful Transylvanian castle park was located in Bonțida.

The first information related to the castle park in Bonțida dates from the mid-18th century, when Dénes Bánffy, following the example of Schönbrunn and Versailles, created a magnificent French park in Bonțida. The French park, created according to the designs of Johann Christian Erras, completed the Baroque splendour of the buildings with its rigid, geometrical shapes, consisting of symmetrical alleys, wide terraces, shrubs, and trimmed bushes.

In the 19th century József Bánffy transformed the park according to the designs of Sámuel Hermann and later, in 1831, of János László. The Romantic landscaping style of English origins emerged as a counterbalance to the rigid forms of the French park. The radial alleys and topiaries were replaced by winding paths and thickets, which created an overall effect of free-growing trees and vegetation.

Today, the castle park hardly evokes its former beauty, as over the decades it has overgrown due to a lack of maintenance, and as its centuries-old trees were arbitrarily cut down. It is currently under the care of the Forestry Office. 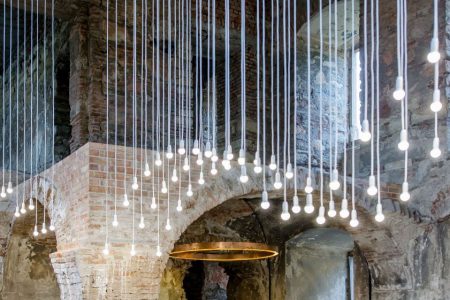 The last inhabitant of the building ensemble was Count Miklós Bánffy, an avant-garde intellectual, who was a politician, writer, graphic artist, and opera director in one person. He left the castle in October 1944, fleeing from the German occupation. The retreating German troops looted and burned down the building, and as a consequence its furnishing, library, and its famous portrait gallery were destroyed. Today, the richness of its rooms and halls is only attested by contemporary photographs. The 1948 nationalisation, inadequate use, and lack of preservation led to the rapid deterioration of the state of the buildings.

Since 2001, an Art Cafe has been operating in the former kitchen building. The Trust opened its educational centre in the Miklós building. Other areas of the castle ensemble, such as the former chapel, the stables, or the main building, are the venues of cultural events and programmes. Apart from the Trust’s own events (Castle Days, Bánffy Day, Heritage Days, etc.), the castle is open to other organisations and institutions as well, such as the Transylvania International Film Festival (TIFF), which in addition to open-air screenings also organises children’s activities for two days, or the Electric Castle Festival, during which the castle becomes the home of electronic music fans year after year.

The park and the lake behind the castle are ideal for picnics or relaxation.

In addition, the castle can be leased to host conferences, camps, weddings, cultural workshops and many other events, for further information please call 0040-264439858 or enquire at office@transylvaniatrust.ro.

Request a quote for organizing a wedding at the castle

Request a quote for organizing a corporate event at the castle