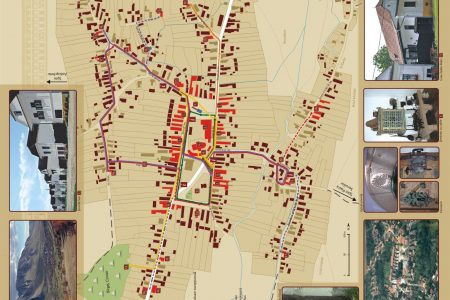 Project funded in part through a US Embassy Bucharest Grant, Ambassadors Fund for Cultural Preservation (The opinions, findings and conclusions or recommendations expressed herein are those of the Author and do not necessarily reflect those of the Department of State.)

The projects goal is to restore three mostly valuable 17-18 c. buildings, in order to raise their historical and educational value. Building no. 260 is the oldest vernacular structure of the country (and possibly of the whole region) dating back to 1668. The structure of this building was successfully saved from collapse in 2002, however the restoration of the finishes and of the two historical fire places was not finalized before this project started. Building no 237 is the best example of a typical 18 century serf house of the Rimetea ethnographic region. This building was properly conserved, but there was a need for the reconstruction of the historical fireplaces of the rooms. Building no 314 is the fire station of the village that contains still operational equipement dating back to the end of the XIX. century. Parts of the building were threatened by collapse, therefore an immediate rescue operation was needed.

The three restored buildings were introduced in the visitor flux of the historic village supported by proper interpretation materials.

Part of the project was to create a heritage trail, a tourist interpretation system in the village that would positively influence the quality of cultural tourism management in the village. Interpretation panels were planned to be mounted in strategic points of the village, and leaflets containing maps, photos and descriptions in three languages were printed.

The project was implemented in the framework of and complementary to the Rimetea Heritage Conservation Project that is continuous since 1996 and views the maintenance,  restoration, conservation and sustainable development of the outstanding vernacular architectural heritage of Rimetea through a support system of the owners of the historic buildings.

2. Restoration of the floors, timber floor for in the room, and clay floor in the kitchen
-the timber floor from  the room was restored, the original supports were used, the floor boards were replaced, as  they were not in a condition that would permit their reuse.
-the clay floor was prepared
-the floor beyond the entrance was repaired, and partly replaced.

3. Restoration of timber ceilings
-the original floor beams and boards that were whitewashed were cleaned, and treated with preservatives. The missing parts were replaced with new timber material according to the original technology. The new parts were treated and painted to brown in order to match their color to the original timber.
-although the kitchen will be presented in the original form – with no ceiling, the perimeter of the house was provided with timber elements in order to close the eaves. This has been achieved with using new timber, treated and partly painted.

8. Courtyard arrangement and draining of street walls
– The draining of the street wall was executed.  During the work the stone basement walls and two beams of the wall had to be repaired.
– The soil level around the house was reduced according to the needed level. Part of the courtyard arrangement the side fences were repaired and the repair of the internal yard fence was finished.

2. Purchase, survey and dismounting of a XIX. century fire place.
-The original baking oven purchased in December 2008 was surveyed.
-The original baking oven was dismounted in the presence of an international expert in vernacular architecture, and the pieces were transported to their final destination, building no. 237 where they were reconstructed.  The process was carefully documented.

4. Repair and restoration and street fence and gate.

1. Rescue intervention for the roof, walls and foundation
-The foundation soleplate of the front wall was removed, as it was completely destroyed. A new sole plate (oak wood) was provided and positioned. Three joints of the three oak timber structural columns with the sole plate that were damaged had to be repaired with partial replacement.
-The main horizontal beam of the front wall was leveled and brought back to horizontal position. Part of the beam, that was damaged was replaced with new timber.
-The doors of the front wall were repositioned. (As the deformed, damaged structure was repaired and brought back to its original position the doors had to be repositioned, as they were altered to match the damaged structure. The iron parts were removed and repositioned, some of them needed to be repaired as well.
-A damaged rafter was totally replaced, a partly damaged rafter was partially replaced. Related joints were reconfigured and repaired.
-The timber structure of the observation tower was repaired, some joints repaired, timber boards partly replaced. Original timber joints were treated with preservatives. New timber was painted to match old color. The oak structural elements of the observation tower were treated with preservatives.
-The tin cladding of the roof was partly replaced with new tin. The preserved original tin was cleaned, the wholes were repaired with welding, than it was treated and over painted, the new tin was as well painted. Related parts of the roof (boards, edge timber elements, contact elements with the tower  were repaired, or replaced.
-The second phase of the restoration was started and finished in August, September 2009. The stone walls of the building were cleaned. The cracks were structurally repaired. For the transversal wall only repointing, for the back wall repointing and lime render was applied. The back wall was repaired also form the outside – as the one of the cracks was penetrating the whole width. The repaired walls were limewashed. The left timber wall of the building was repaired, the soil level form outside was reduced, the rotten timber parts including the soil plates were replaced.

D. Works related to the interpretation of the cultural heritage

1. Design of outside interpretation panels

-A workshop was organized to discuss the form and position of the interpretation panels. The position of the boards was decided, a fine tuning was done after the sewage system of the town was completed. The basic form of the boards was selected from a set of proposals. The design of the boards was completed following the decisions of the workshop. The selected form features a traditional gate characteristic to the village.
-the supports were produced and mounted
-design of the content for the inside and outside interpretation panels was completed.
– the production of the contents, the text and the translations was completed, the panels were as well printed and mounted to their specific locations.
-leaflets containing the description of tourist objectives and the sightseeing trails were printed in English, Romanian and Hungarian language all together in 6000 pieces.
-the information contained in the panels and leaflets is available in a specific format on the web, together with other materials related to the heritage conservation.