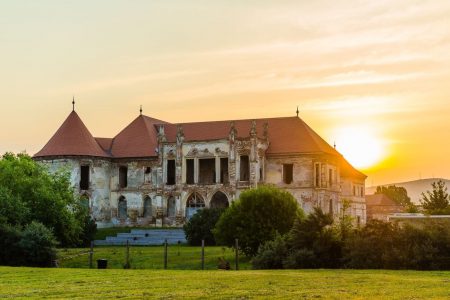 The Bánffy Castle is one of the most significant castle ensembles in Transylvania. The ensemble formerly known as the Versailles of Transylvania reached an extremely precarious condition by the end of the nineties. Since its creation our Foundation has carefully followed the castle’s destiny.

The owner of the castle is the daughter of the Count Miklós Bánffy, Countess Katalin Bánffy who lives in Morocco. The Countess and the Transylvania Trust signed in 2008 a Concession Agreement for 49 years, according to which the Transylvania Trust will be responsible for the maintenance and upkeep of the castle and will develop it as a Built Heritage Conservation Training Centre and Cultural Centre.

Due to our application the site was included on the 100 Most Endangered Monuments List published by the World Monuments Watch in 1999. Because of its scale, architectural and historic value, and its level of degradation, the restoration and use of the castle is a complex task that can be accomplished with success only by applying a proper long-term strategy and through international cooperation.

The establishment of a Cultural Café in the former kitchen block was accomplished in 2001.
In 2003 we carried out the structural consolidation of the Miklós building and we finalised its roof with the support of the World Monuments Fund. In 2004-2005 the Built Heritage Conservation Training Centre was officially opened in the Miklós building thanks to the Culture 2000 framework programme. The centre comprises at present conference room, study room/library and offices. With the support granted through the Phare 2002 programme we managed to partially furnish it and to carry out smaller interior works.

During 2006-2007, thanks to the support of the EU Culture 2000 programme, the partial conservation of the stables was achieved together with the restoration of the Chapel within the main building. The restored Chapel also serves as a Community Cultural Centre which is available to local residents for a variety of events. During the same period two exhibition rooms have been established at the main Entrance Gates to the Castle.

In 2008 the interior restoration of the Miklós Building continued, which included the installation of central heating, enabling the building to be used all year round. The building incorporates a conference room, project rooms, office and library. The attached Bastion was also upgraded to incorporate accommodation at two levels.
This year was very important and remarkable in the existence of the Transylvania Trust Foundation. It marked the year when The International Built Heritage Conservation Training Centre, Bánffy Castle was awarded with the European Union/Europa Nostra main prize for Cultural Heritage in the field of Education, Training and Awareness Raising.

Our programme with the title of The restoration of Bánffy Castle, Bonțida and its use as a training workshop was launched in 2019, the aim of which is the complete structural reinforcement of the main building and the restoration of the Neo-Gothic wing, as well as the restoration of the former carriage house and its use as a training workshop. The large-scale restoration works are supported by the Hungarian Government through the Bethlen Gábor Fund. 2019 passed mainly with the planning process, as well as obtaining the necessary permits and contracting required for the start of the works. The excavation works needed to prepare the archaeological study were carried out under the supervision of the National Museum of Transylvanian History, and at the same time a 3D laser scan and survey of the castle’s western wing was performed, indicating to the design team the exact location, extent, etc. of the interventions needed.

One of the most endangered parts of the building was the stone-vaulted cellar of the main building’s western, Renaissance wing, as a load-bearing column was built on its keystone. Last autumn it was possible to relieve this stone vault by building under it a new one out of brick. This was the first intervention on this wing since 1944. In the basement secured in this manner, a storage area was created for the stone elements rescued from the castle.

As the castle needs continuous maintenance, we carried out certain works in 2019 as well with the help of the students from the conservation training project, such as reinforcing the kitchen tower’s plinth, strengthening and rebuilding some of the domical vaults in the stables, restoring the pinnacles decorating the main building, as well as restoring and resetting the stone windowsills.

The overall aim of the project is the complete restoration of the ensemble, carried out using traditional methods and materials, through international collaboration and an exemplary cooperation between designers and executors. Through this we would like to set an example of sustainable development of the built heritage, and of professional conservation, which incorporates new concepts in combining the teaching process with physical restoration through practical workshops, and with the drive of public expectation and approval.